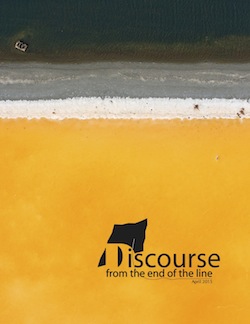 In the latest issue of Discourse: from the end of the line, Scott Skinner and Cho Byong Ook introduce the new home for the Drachen Foundation kite collection, Cris Benton discusses his experiences with kite aerial photography, ​high school students report on their internships with Joe Hadzicki at Revolution Kites, Ajay Prakash recounts the 2015 Desert Kite Festival, and Nobuhiko Yoshizumi’s kites find a permanent place in the sun. 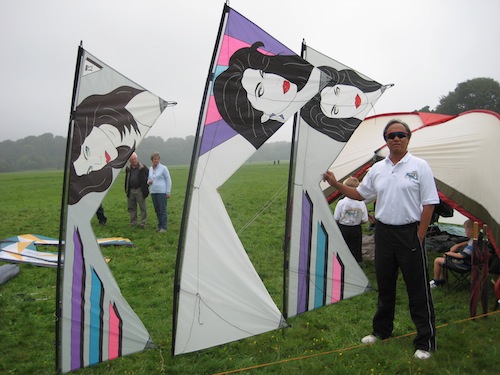 What can I say about Ron? Architect by day, kite flyer extraordinaire in his off hours.

I first met Ron in 1989. He’d been introduced to kite flying by his friend, Roy Ang, who describes it in the following words to Ron, "I will never, NEVER forget the first time you tried flying my Neos Omega and it was like you got hit by lightning… Probably the best thing that ever happened to you." This was in the earliest days, before Revolution was Revolution and no one knew me. I stopped to talk to him on the field at Mission Bay and his enthusiasm for kiting was infectious — a man after my own heart. We bonded over our shared love of thinking up fun things to do with kites, and perhaps no one was more creative than Ron in coming up with beautiful and acrobatic ballet displays.

But all that came later. In the beginning we were JUST a couple of guys. And one of the first things that comes to mind when I think of Ron is the number 587-8738. He got this as his phone number years ago. He was the first person I knew who had a vanity number: "JUST REV." He liked it because it was easy to remember. He loved giving out that number to all of his friends and acquaintances. Those who didn’t know what it meant were always treated to a great explanation, and those who knew him didn’t need one.

But calling him JUST REV doesn’t seem like quite enough. He was more than a "just" — he should have been STAR REV or HERO REV! His passion for kiting took him far. In his very first competition, he placed second to the then national champion, and after that he never looked back. In 1996, he took his first national title, and eventually racked up 11 titles in Master’s Quad Line Ballet, Master’s Quad Line Precision, and Open Freestyle. In 2002, he held all three national titles simultaneously.

In an interview he gave to the San Luis Obispo Tribune in 2014, Ron said, “It’s one of those sports where everybody’s got different backgrounds, but a common interest in flying.” And although it might seem random to others, the sport made perfect sense to him. “You can fly without leaving the ground. Kite flying is an extension of myself in the sky.”

The challenge of competition didn’t stop there. He flew with the team "Too Much Fun" for over a decade and he and the Lummas family really did have too much fun flying in competitions and showcases worldwide. He eventually became a judge and was instrumental in guiding and mentoring a large number of flyers. If he saw you having a problem on the field, he would come over and share his expertise. He generously contributed his time and organizational abilities to a number of kiting endeavors, particularly the San Diego Kite Club. He was the master of ceremonies at the New Year’s Day kite fly, as well as many other events. Hardly anyone has the chance to be the ringleader of so much fun! And he had friends everywhere to show for it!

Then there was his profession. He was JUST an architect who graduated from a little university that was JUST USC. He was proud of this achievement because although he had the love and support of his parents, they weren’t really able to help him with the logistics of the whole thing. Sweetwater High School, class of 1974, he pretty much accomplished college through sheer hard work and determination.

As a professional, he always took his clients’ needs seriously. If you had a budget, he did his best to stick to it. He came up with interesting solutions that were out of the box. He was patient, cool under pressure, and could be counted on when plans had to go to the city for approval. He created beautiful spaces that will live on — a testament to his talent.

Have I mentioned the Chargers? Because really, he was JUST a FAN! He said it was for the love of the sport, but I suspect it was really about the Charger girls! However, he rarely missed a game and had lots of company in the stands.

And how about his car? He JUST drove a Porsche. I suspect this had something to do with girls as well, but that car was sure his baby! Except for his cats…he JUST loved his furry friends!

And let’s not forget his personality. Ron was JUST FUN. From outrageous Halloween costumes (Blind Referee or Poker Face anyone?) to kite trading cards, from his custom world tour t-shirts (called his "ego" shirts) to his random Facebook postings, Ron JUST had a quirky sense of humor. Who else would count the number of cookies in differently packaged Girl Scout cookie boxes just to make sure they were the same? Or carry an ID card in the name of Bruce Lee? Or give out an award at the Miss Satun beauty pageant? Or wear a tux on the flying field? I may have only heard him complain once — he really did not love the weather this winter at the Delevan, Wisconsin "Sky Circus on Ice." This was likely due to the fact that even he JUST couldn’t wear shorts in the snow with a wind chill factor of minus 25 degrees.

And how about the time he cheated death? He was JUST a SURVIVOR! He was brutally attacked one evening and barely escaped with his life. I think he was different after that. He was always easy to get along with, but after that he really knew what was important. He tried not to sweat the small stuff. He lived and loved every day to the fullest! Mild mannered architect during the week and wild kite enthusiast on the weekend…or for two or three weeks in a row if he happened to be on one of his worldwide adventures. Now that’s a life worth living and Ron had it all worked out.

So part of what makes this so sad and shocking is that Ron JUST seemed invincible. This was so sudden that we didn’t have the chance to say goodbye. But maybe that’s because Ron didn’t need time to make amends or apologies. What you saw with Ron is what you got. A friend to all who didn’t hold a grudge, who had your place on the line. He was truly one of kiting’s foremost ambassadors who shared his passion with friends all over the world. I think Ron would be shocked by the outpouring of emotion on his behalf, because he never lost his humility or his sense of JUST being part of the family.

After his latest trip, he posted the following on Facebook: "Headed home after 20 days of travel and kite festivals and sightseeing. It’s been a long journey but also very memorable. A BONUS: On this trip I finally got to be one of those guys with ‘Elite’ status on Philippine Airlines and got head of line privileges, priority boarding, and other perks. It does make a difference when boarding the plane and when your luggage comes out first as well."

Someone finally got it right. In the eyes of others, Ron was ELITE!

If you can excuse me now, I need to make a call. Now what was that number? 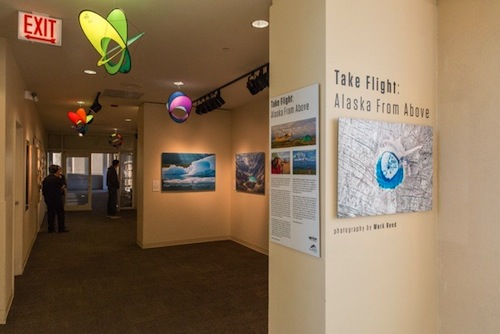 Prism kite founders Mark Reed and Chris Buchanan spend much of their summers exploring Alaska’s backcountry in their homebuilt bush plane, field-testing Prism kites and capturing images they hope will inspire others to fly and find perspective in the wild places beyond the end of the road.

This is a family in flight — from building and piloting their own plane to the design and manufacturing of some of the world’s best kites. This group of three — Mark, Chris, and daughter Rachel — create a never-ending fascination with things that fly.

Members of the Alaska Wilderness League since 2012, they have collaborated with the League in creating two calendars featuring their trips by plane into some of the most remote places in Alaska. Photos of these trips are on display through the end of 2015 at the Peggy Notebaert Nature Museum in Chicago. These 18 photos have brought Alaska to thousands of visitors. On April 28th, Mark gave a wonderful lecture on their life in flight, from kite design and manufacturing to flying around Alaska each summer. Drachen board member Ali Fujino worked with them at the museum as 100 people made paper Arctic bird kites designed by the Drachen Foundation for the League.