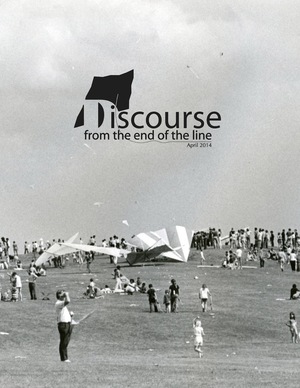 In this issue, Maria Elena García Autino makes unexpected kites with found materials in Argentine barrios, we catch up with Drachen friend Dr. Jeff Cain and his inspiring work on behalf of amputees, Beth Gouldin discovers kites as a vehicle for her artistic voice, Drachen Board President Scott Skinner talks about his journey in kite making, and Clara Wainwright takes us back in time to the late 1960s and early 1970s where we are introduced to the Great Boston Kite Festival. 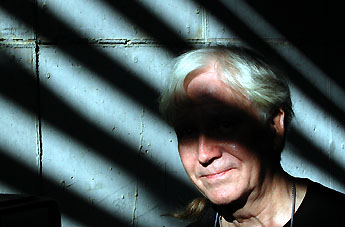 A heavy heart brings sad news. Tal Streeter passed away this afternoon in Santa Fe after another recent stroke last week. He was in deep sleep mode most of this week and was just coming out of it and starting to speak today. Apparently his last words were… “Higher and higher”…

We’ll all miss Tal. I had a long friendship with him since 1977 when I wrote a fan letter to him after reading his book “The Art of the Japanese Kite”. The friendship continued through the years sharing ideas on sky art, kites and sculpture, his favorite topics of conversation beside his vast curiosity that was evident through conversations, his writings and with anyone who could ride with his poetic mind. I enjoyed spending time with him during many kite festival trips around the world and musing on many topics on which Tal could dance like a butterfly.

Since his major ischemic stroke in February 2011 that affected his right hemisphere he has been in the care of his family, nurses and friends. He was still very much within the realm of his own creative imagination and continued to dream.

He was involved in some pretty remarkable projects and helped by his wife, Dorothy Ann Streeter (Romig) and long time friends, David Wagner and his wife Fiona Wong to create the Dream of Flight Museum and Library in Santa Fe, New Mexico. The library and museum is supported by the his “Friends of the Sky Foundation”. It is now nearing completion and will soon house an extensive library of Tal’s works, his vast collection of kites, writings and sculpture projects.

I’ll include a writing of Tal’s here about…

The Path of Least Resistance and the Trick
by Tal Streeter

In the sky, among the clouds. A kite at rest. Still. A child’s kite. On the ground, a child holding the kite string tightly, eyes turned upward, scanning the sky, the kite’s place there.

A kite, any kite, but now this kite, this child’s kite in the sky unmoving. A point of stillness in the vast heavens. “Stillness:” something even the masters of flight, our fine feathered friends with their rapturous, unparalleled airborne pyrotechnics, find difficult to achieve. Only a slight ripple on the kite’s paper skin, a sign of the wind’s breath, holds the kite aloft. This kite, its long thin line of string stretching back down to earth, gripped tightly in the child’s hand, in the child’s mind, imagining the wind’s breath, perched there, riding on the kite’s back, looking down, wide-eyed at the fabulously new perspective, astride a kite, reaching out to embrace the earth.

In the child’s mind, the kite and its passenger a still point far off in the sky

Clouds drawing slowly closer. the kite leans to the left, dipping, its passenger holding on tight, it speeds across the heavens, then comes back to rest once again, a still point in the ocean sky.

The wind once again breathing lightly, rippling the kite’s skin and that of the child, holding them aloft ever so gently.

Below, infinitely small, a child shakes the string, sending messages from the earth up to its twin and from there, passed on out through the distant sky.

A child’s imagination notwithstanding, the kite follows the path chosen by nature, pulling from an arc into a straight line, tracing the path of least resistance, tracking the paths laid down by ocean currents and smaller tributaries of air. The excess and frugality of nature, at once frighteningly excessive and spare: the child’s kite, perchance on the side of the spare, on the side of conservation of energy as in science, as in philosophy, the evidence of “Ockham’s razor,” the law of parsimony,” the “path of least resistance:”

The evidence of stillness described by science, governed by the “law of inertia.”

A child—in their imagination, riding on the back of a kite; on the earth, running across a meadow, jumping over weeds and imaginary obstacles; hopping, one foot on a curb, the other in the gutter of a city street; at the kitchen table eating a piece of toast—not by the laws of man’s physics; not by laws at all; seeing everything fresh, as if by magic, the way of nature, the simplicity of kites in the newness of a child’s mind: kites, the sky, hopping, skipping and breakfast toast. All magic. All enchantment.

“The sky begins at your feet” … “higher and higher”

“He was our beacon in the fog…” – Ali Fujino, Drachen Foundation

“This is very sad. Tal was a unique and wonderful man — followed his own path and his own train of thought. His work, particularly the Art of the Japanese Kite, was so very important to kite-makers around the world. I was lucky to discover a copy of the book in the tiny art library at the Kansas City Art Institute when I was a student, and luckier still to know Tal and work with him on several projects. His childlike imagination and deep curiosity produced a remarkable body of artwork.” – Stuart Allen, Drachen Foundation

“A sad moment indeed. A man I met in India, early in my journey to the world of floating objects… He impressed me with his love of kites and his quest to make an impact in the world of flying art. Tal, like the recent loss of other friends of the wind, is making the sky a bigger place to fill… I for one remain committed to follow in their footsteps and their quest to fill the sky from my feet forever ‘higher and higher’ into the sky!!!” – Jose Sainz, Drachen Foundation

“Tal was truly one of the finest. May he fly high.” – Ajay Prakash, India

If you’d like to leave condolences, stories, and messages for Tal’s family, please go to Tal’s Butterfly Blog at http://talsbutterflyblog.blogspot.com. The blog is managed by Tal’s daughter Lissa and wife Dorothy Ann Streeter (Romig) and includes many stories from Tal’s life the last three years. Leave a message in the current post comment bar.

I’m so saddened to hear of the passing of Charlie Sotich. For those of us who came to kites in the 1970s and 1980s, Charlie’s was one of the first names we heard. He was already a legend of miniature kite making, and at any opportunity, we would buy, trade, or barter for one of Charlie’s creations. Known affectionately as “King of the Minis” and “The Scientist,” the names reflected the esteemed position he held in the kite world. Born, reared, and educated in Chicago, he took a master’s degree at the Illinois Institute of Technology and had a twenty-five-year career as a mechanical engineer. Early on he built and flew rubberband powered balsa model airplanes for recreation and won many trophies with his creations, racking up a 33-minute flight in a blimp hangar. When he turned to kites in 1973, he used the light weight technology he had mastered to make miniatures kites.

It’s been years since I have actively sought one of Charlie’s kites because the “new” kite fans who have come to the sport in the 90s and 00s deserve their shot at history too. But I can open almost any drawer in my kite room and find one of Charlie’s treasures, and they still speak to me today as clearly as they did 20 or more years ago. These are miniature kites unlike any found in Eastern kite cultures; they are contemporary designs like deltas and Eddys, and they are made in Western materials like carbon fiber and mylar.

I heard stories when I first met Charlie that he would make his own mylar film for his smallest creations. Who would do that?!  Charlie would, and did, and the creations were flying marvels. One of Charlie’s “large” Eddy kites, about eight inches tall and across, flies on the most delicate of wind currents. Air conditioning in a room is enough to cause havoc. Many of us would send Charlie a favorite stamp, beer label, or other paper treasure and would be treated the next time we met with a marvelous miniature kite made by Charlie.

Along with Harm van Veen and Nobohiku Yoshizumi, Charlie was one of the founders of the International Friends of Small Kites (IFOSK). Their small (of course) newsletter was sent to fans internationally and featured mini kite plans from all three as well as the humorous kite cartoons of Harm. These three influenced a generation of kite makers all over the world and spread the knowledge for this aspect of kiting to continue to grow.

We were all so lucky to have moments with this kind, generous, and humble man. He treated us all with his smile, his grace, and too many small kites to count. 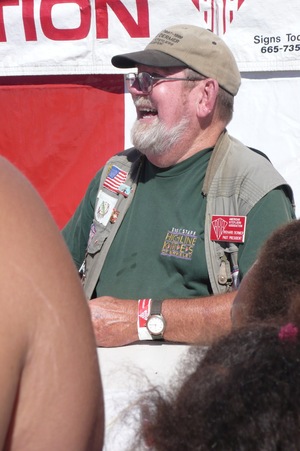 Tireless, genuine, dedicated, I could go on and on with straightforward descriptions of our friend, Richard Dermer. For as long as I have been involved in kites, Richard and his wife Marti were landmarks on the American kite scene. Richard was a reminder to all of us that our national kite association needed our constant support – it was not to be taken for granted and needed our attention to remain relevant, engaged, and healthy.

Richard never let an opportunity to promote the American Kitefliers Association go to waste. At school workshops, kite festivals, community kite events, and our own national conventions, there was Richard: manning the AKA booth, signing up new members, making impromptu kites, and generally engaging anyone and everyone who was lucky enough to stop by. I’m sure that he and Marti lost count long ago of the number of workshops they gave, but the number doesn’t matter. What matters is the great positive example that the two provided to countless school children, interested adults, and longtime AKA members.

Richard’s Hideaway Pizza was a Stillwater, Oklahoma landmark and grew to have outlets all over the state. Alums would routinely ask Richard and Marti to FedEx genuine Hideaway Pizzas to locations all over the United States. But it was Richard’s caring and hands-on management style that distinguished the restaurant and provided the impetus for its success. He and Marti became surrogate parents for many OSU students while their college careers and Hideaway employment progressed. Any businessman could learn from Richard’s success.

But it was Richard’s passion for kites and kite flying that we all most remember. He actively promoted the beauty and wonder of kites by displaying them prominently in many of his restaurants, he showed the wholesomeness of flying kites as a family, and he worked tirelessly behind the scenes to ensure that national competitors and festival-goers could enjoy their passion while the gritty, little details of running the event were smoothed over and managed by Richard.

Circle June 19th on your calendars, as that is the day Marti has chosen to hold a memorial for Richard. Be ready to share a personal memory of Richard while you fly kites in the Oklahoma skies or anywhere else in the world. 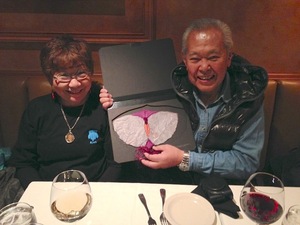 Make a $75.00 donation to the Drachen Foundation and receive a signed paper art kite from Jose Sainz! Limited edition. Each kite is different but they are all from the same series and each has their own travel case.

Not to be missed by any kite flying enthusiast, collector, or philanthropist!